Presence of policewomen on horseback in Sutton 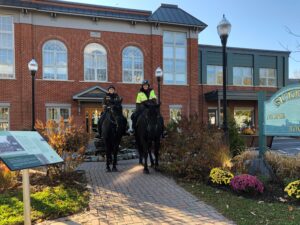 Some people surely noticed last Sunday the presence of two policewomen on horseback in Sutton. This is the fifth time since the spring that we have received a visit by SQ patrollers on horseback. Their mandate is currently to raise awareness of the health rules concerning COVID-19, while also ensuring compliance with the Highway Code.

At the intersection of Principale and Academy Streets, Sergeant Emmanuelle Groleau and Agent Joëlle Leclerc rode two magnificent black Canadian horses, accustomed to these missions. They also patrolled the surrounding streets, taking advantage of the curiosity of passers-by to discuss the health situation. When necessary, they have full power to write up violations.

Sergeant Emmanuelle Groleau (on the right in the photo) is the chief instructor of the Sûreté du Québec equestrian team launched as a pilot project four years ago and confirmed since 2019. The squad currently has eight horses for all of Quebec but is expected to grow in the face of the success of its missions. Three horses are based in the Eastern Townships, in Sainte-Catherine-de-Hatley, and make three to four outings a week with their police riders in the municipalities where they are called to. These patrollers are also mandated to respond to emergency calls coming from the sector. They notably intervened in Glen Sutton last June during an invasion of private property.

For the Sûreté du Québec, the equestrian team helps foster positive contact with the community, as well as with the most vulnerable clientele.