The Town outlined in 2014 a three phase plan in order to create an environment ideal to the practice of sports and recreational activities, which would be accessible to everyone in the village core.

The Goyette-Hill Park offers at the same time a vast and minimalist site, extremely well located between Western Street and the Route verte, and is the logical choice for the practice of multi-sports. Furthermore, in view of the lack of investment in the park over the last 30 years, a major overhaul was justified.

By expanding sporting and recreational installations, we want to better meet the needs of the population as regards the practice of physical and sports activities which benefit people of all ages.

During the first phase of the project in 2014, we worked on the ball field by replacing floodlights, adding protective nets and installing a scoreboard thanks to the Town of Cowansville..

2015 was a key year in developing durable multisports installations at the Goyette-Hill Park. During the course of the second phase, double tennis courts were built with an acrylic surface, in order to provide a high performance result. In the first year of operations, we received more than three times the number of members expected.

In addition to erecting a real skating rink on a concrete base for the winter, we took into consideration the craze for dek hockey. By adapting this surface for the practice of the two sports activities, the multi-purpose skating rink is used during the four seasons. Users may now use the park’s facilities in the evening as lighting systems have been installed for the tennis courts, the skating rink and the skateboard park.

A vegetated knoll is now located between the small soccer field and the tennis court and can be used as a winter slide, as a picnic spot and to attend tennis and soccer matches.

The kids’ play areas, which used to be scattered around the park, have now been consolidated into one area to make it easier for parents to keep an eye on the little ones. The gazebo has been upgraded, moved and supplied with power so it is more useful during events held in poor weather.

Also, an attractive network of paths lined with maples, red oaks, evergreens and plants, will gradually take shape between the different areas. 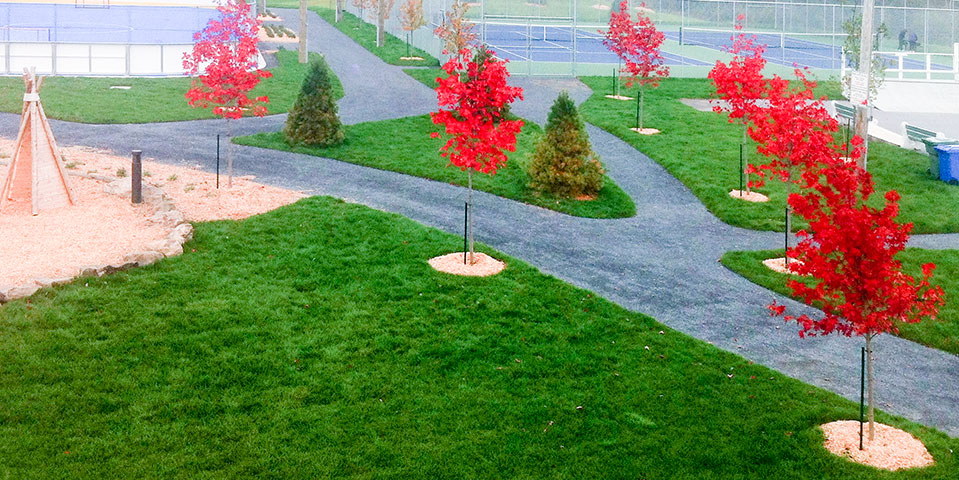 New pavilion – sports chalet – accessible, inviting and encouraging citizens to use the infrastructures present in the park. An agora can accommodate both skaters, bathers, players of sports associations as well as citizens and visitors during the holding of events.

New water games, open for all, but specially designed for children from 1 to 12 years, allow an earlier opening date at the beginning of the season and a later closing date depending on the temperature.

A path has been completed to reach all recreational fields.

A new intergenerational space has been integrated into the park, including fitness modules for all.

New modules in concrete that are durable, safer and less maintenance-intensive have been custom built and installed for the skateboard park.

An open area, located at the entrance of the park on the north side, encourages relaxation and is ideal for picnics and groups. A natural amphitheater is set up, which can accommodate about fifty spectators at cultural and community events.

Phase 3 work costs (in French only)

Goyette-Hill Park, an attraction for Sutton

In completing this last phase, we have maximized the recreational infrastructures in a friendly and convivial location, where we can also enjoy the magnificent view of the Sutton Mountains. The park is an attraction site for citizens and tourists as well as for new families hoping to settle in our community.