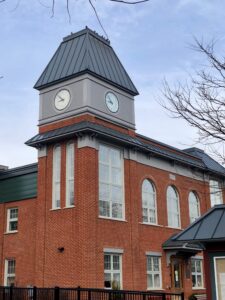 The Sutton municipal clock has finally returned to its home in the tower of the town hall! Broken for several years, it was entrusted last June to a clockmaker in Saint-Jean-sur-Richelieu who restored its mechanism. The clock, with its east and south faces, has a long history entwined with Sutton’s community spirit.

A tribute to Sutton’s war dead

The clock was donated to the Town in 1949 by the Junior Girls Institute, which later became the Women’s Institute. Established in 1923, this charitable association of young girls gave its devoted members the mission “to improve oneself, to improve one’s home and to improve one’s community”. Their first major community project, started in 1927, was to raise money to buy a clock in memory of Sutton’s soldiers killed in action in World War I. An initial deposit of $25 was made immediately but, even with the contribution of donors such as the Society for Detecting Horse Thieves, it took more than twenty years to raise the total cost of $1,817.64. Installed in 1949, Sutton’s clock serves as a reminder of the sacrifice of its soldiers who were victims of World War I, World War II and other conflicts whose names are listed on the commemorative panels attached to the Town Hall.

Made by Suttonnais Fred D. Day, nicknamed “Hap Day,” originally the clock had to be wound manually via a mechanism in one of the town hall offices. In the early 2000s, however, its mechanism was changed to an electronic one, thus simplifying its control. After a long period of inactivity, the refurbishment of its mechanism means that the Town Hall clock once again accompanies our community throughout the day and stands as a visual reminder of the power of community action.